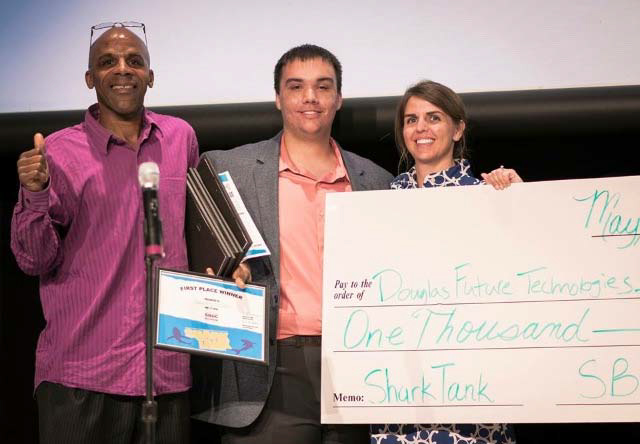 Randy Douglas, the founder of Douglas Security Technologies LLC, is an inventor from Aberdeen, MD who contacted the Northern Region of Maryland SBDC with the hopes of bringing his patented mobile technology to market. With the help of SBDC counselors and an SBDC event, Douglas is closer to his dream than he ever expected.

When Douglas first reached out to the SBDC in early 2015, he had recently lost his job as a designer for Chrysler Motors, and was in desperate need to get back on his feet. Being the father of six daughters, losing his job was detrimental. Douglas had been holding onto a patent for a mobile security device since 2005, but never had the time or knowledge on how to bring it to the next stage. With everything he had ever worked for on the line, Douglas found his entrepreneurial spirit.

Douglas worked closely with SBDC counselors developing a business plan, perfecting a pitch, learning how to market a product, and discussing how to fund his prototype. When the Northern Region of Maryland SBDC launched Shark Tank Harford County, Douglas was quick to apply with the well-written business plan he worked on with the help of his counselors. Douglas was accepted into the competition against six other entrepreneurs, and pitched his product, Amber Armor, to five well-known business leaders throughout the state of Maryland. The judges enjoyed his pitch and understood his simple mission, "To bring safety to the world through new technology." Amber Armor is a personal security bracelet designed for a parent-child combination, the elimination of body cameras for police officers, and to protect our military on the battlefield. Amber Armor’s patented design features:

Douglas stole the show, and was announced as the first winner of Shark Tank Harford County. Douglas received a $1,000 grand prize, and a branding package provided by a local small business, but that was not enough. Several investors were in the audience, and three weeks later, Douglas had a check for $40,000 with access to more capital to build his prototype. Douglas plans to sell or license Amber Armor to a large company to get his product on the wrist of millions quickly. Being an inventor at heart, Douglas has several other designs he is working on as Amber Armor is in the process of being developed.

If you are planning to start or even thinking of starting this will assess your readiness.

If you are already in business this assessment will help us determine your needs.